Oh yes, I did. I tackled Journey's classic. While I apologize, in advance for any head-shakes this may cause, my motives are good.

I have a stage 4 friend, who's flying in from Oregon next week for our Aim At Melanoma Walk in Charlotte and his mantra is, "Don't Stop Believin'" and when he says it, we believe it. Well, Mark, has asked for Journey and Journey he's going to get. This will teach him!

Here's a link to the official video. So, Mark, this is for you:

(Chorus)
Patients daring, up and down the cancer ward
Their spirits hopeful in the fight
For cure people, living just to find a cure
Out there, somewhere in the fight.

Treating hard to get my fill,
Everybody knows the drill
Tryin' anything to roll the dice,
Just one more time


Carol here, one day, people, one day. Melanoma's going down.

And I will be counted among the grateful! 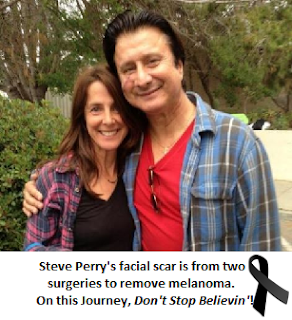 So will Journey's Steve Perry who is, also, a melanoma survivor.