Melanoma Is Not A "Second Class" Roll Your Eyes Cancer

But it's not "society" that's our biggest problem. It's the people we know. Our family and friends, colleagues, acquaintances, that can be our biggest obstacles and problems.

Last night, as I write, I posted this on Melanoma Prayer Center and on my personal Facebook page:
"OH, how I wish we could remove melanoma from the "skin cancer" category! It doesn't fit. Melanoma doesn't need skin to begin, grow, or spread. It can begin in the eye, mouth, internal organs, and those places where the sun don't shine. In people of ALL skin tones and ALL ages, even children. Sun history and tanning bed history aren't the only contributing factors...though they are HUGE ones. Annnnd stages 0 and 1 can come back stage 4..and that will be melanoma (horrible tumors) that has spread to brain, lungs, liver, bones, etc. It's not the same as "brain cancer," etc. THAT is NOT "just skin cancer!" Especially not to the 77,000 people who will be diagnosed this year and their families."

Well, my brain got to wondering, as it tends to do, what the world wide figures for melanoma are. That's when I found the newest figures from the American Academy of Dermatology for 2013 and they were very different from the ones I gave here (the last ones I had seen).

Soooo.....I made this graphic so people could easily share, and keep, the newest figures: 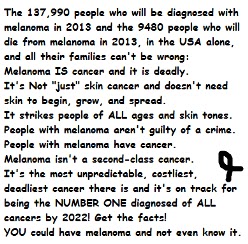 That first status that with the older number, so far, has been shared 65 times (that's A LOT for MPC)!

One person commented, "I used to feel guilty for being so scared, feeling so vulnerable and only having had "skin cancer". Thank you for this post." Three people, besides me, agreed. Again, that's a lot for MPC! This person touched a nerve!

Other comments: "Most people believe it's a spot on the skin you remove it no big deal. Tell that to My Momma who has two forms now from one small mole on her back which was removed. Now it's bronchial tubes lungs left femur n small spot on her brain."

"Those people who think its nothing haven't been in my shoes the last 4 years of my life. I've had to put off having a family because it can spread to an unborn baby. I can't wait until I go into remission."

"I completely agree. My sister has melanoma and it has metastasized to her back and brain. I was talking to a co-worker about her cancer when she asked what kind of cancer my sister had. When I said melanoma, she said "oh, just skin cancer". Not even close. It drives me crazy that it gets swept away like that."

"I feel all of you, when I was diagnosed that's what I said, even though I knew it was no joke, I felt bad for feeling bad when my step mom is battling terminal breast cancer and I just had "skin cancer" but this beast is beyond just skin cancer! That's why we need to get the word out there about it because this is some serious aggressive evil stuff! Anyways get scan results tomorrow then begin my long harsh battle against this SOB! Prayers to all my melanomies!! Stay positive and keep fighting!!"

The graphic I created has been shared 64 times so far.

I've read, in many melanoma-related places, of people being made to feel guilty of having melanoma, people not understanding. The comments. The looks. I wrote my last post about helping melahomies escape from the melanoma underground.

Something's got to give. It has to. And it will.

One, word to me melahomes: YOU know what you've got and live with even if nobody else does. You have done nothing to feel guilty about. You do not have a lesser cancer...as if there even is such a thing...you have melanoma...the most unpredictable, costliest, sneakiest, vicious, numbers rising cancer there is. Even if other people don't get it, YOU DO. Don't let anybody make you feel guilty, bad, or anything else. Don't let their ignorance pull you down even further. That's their deadly problem. Not yours. You know what you live with, so do the people you share a house with, so does the medical community, and so do insurance companies.

Two, a word to people who hear "melanoma" and roll their eyes and think oh...skin cancer.  No. That's deadly ignorance and arrogance. Better brush up on what this cancer REALLY is, because what it REALLY is is the fastest growing rate-of-diagnosis-wise of ALL cancers and in NINE short years, 2022, is on track for being THE MOST DIAGNOSED OF ALL cancers. Pink will eat Black's dust.

And, 1 in 50 men and women will be diagnosed with melanoma of the skin during their lifetime.

The next time you're in a crowd of at least 50 people... if you don't have melanoma and don't know what it is (and no it's not even close to "skin cancer"...do a blog site search)...consider one of those 50 will, statistically, develop melanoma before they die. Heck, it might just be what kills them. Then consider YOU'RE in that crowd. It could be YOU.

Trust me. When you hear that diagnosis...you'll stop rolling your eyes.

Because you've got it.